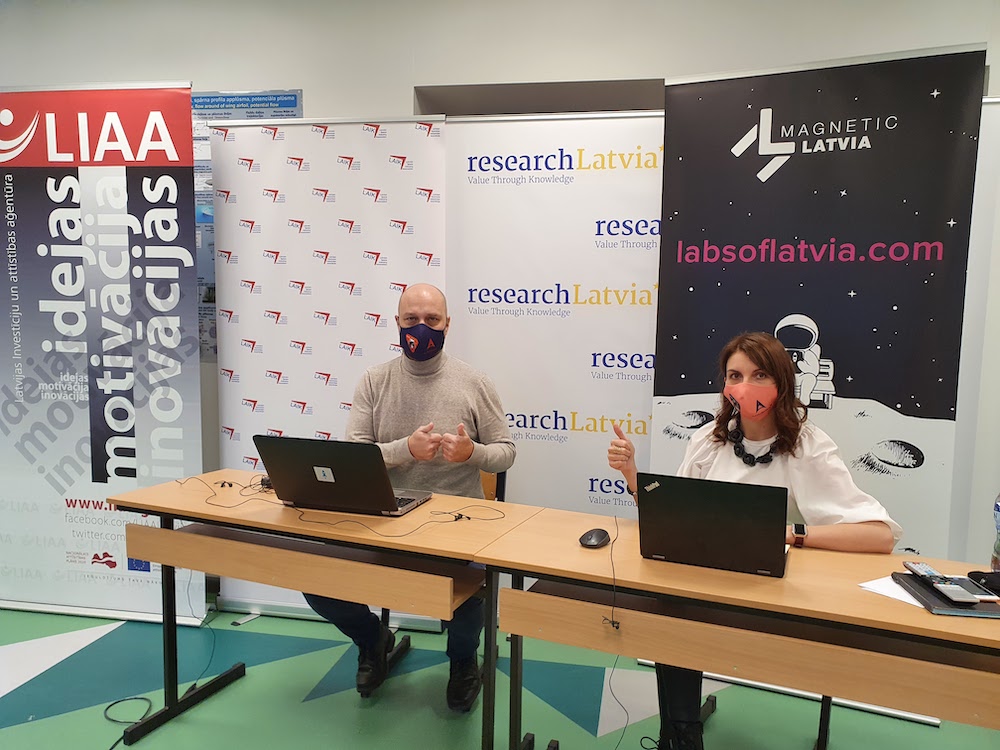 The international space hackathon “Act in Space” has also ended in Latvia. It took place for 24 hours in 75 cities in 45 countries around the world. The winner of the Latvian competition - a solution for continuous observation using nano-satellites - will now compete for the main prize in the international competition: weightless flight with an Airbus A310 Zero G aircraft.

"This was my 21st hackathon, in which I have participated, and the second "Act in Space” hackathon - in the first “Act in Space” hackathon my team got the 2nd place, this time I managed to win. From the very beginning, we had a clear idea of what we wanted to work on, and with the support of my team members, we managed to implement it. Many thanks to the mentors as well, without their knowledge and support the outcome would not be as good. Participation in the international competition is a good motivation for me and the team to move towards the implementation of the idea, and we have the necessary competencies to implement it.” says Shravan Koundina Vutukuru, a representative of the winning team and a researcher at Riga Technical University.

The team "xT saam" won the 2nd place in the Latvian competition of hackathon "Act in Space". The team hopes to change the way the space industry gets the resources it needs by providing fully automated production in space. This would mean more efficient use of resources on Earth and the Moon, increased safety for people on the Moon, as well as reduce the risk of environmental hazards. The technology developed by the team is based on active learning and machine learning algorithms. The prize of this team is further cooperation with the Latvian Space Industry Association (LAIK) in developing the idea.

The hackathon jury awarded the 3rd place to two teams - "Skylar" and "MaxSpace". Skylar offers to produce green energy from underwater volcanoes using space data. The team found high underwater volcanic activity off the coasts of Chile and Japan. These regions will provide satellite data that will be processed by artificial intelligence. The information will then be manually transmitted to a unmanned vessel, which will collect energy with the help of submarine turbines.

The other 3rd place winner - the "MaxSpace" team - wants to develop a "Don't let us die" application for smartphones. It would make it possible to compare landscapes now and in the future if climate change continues at its current rate. This application would also offer additional challenges on how to sort waste properly and how to reduce carbon dioxide emissions on a daily basis.

Both teams that won 3rd place were awarded prizes and especially praised by one of the event organizers - the Latvian Investment and Development Agency (LIAA). "We are pleased that a hackathon dedicated to the space industry got the interested of so many people. The ideas put forward by the 13 teams were exciting and it is very likely that one of them will soon make a significant contribution to space exploration. From the perspective of LIAA, we highly appreciate the ideas related to green innovations, which can ensure a relatively fast return in the national economy,” points out Reinis Āzis, LIAA's Deputy Director for Investment.

The great interest is also assessed as a positive indicator by Pauls Irbins, the head of the Latvian Space Industries Association (LAIK), as well as the other organizer of the event: “The most important thing was the huge interest  because more than 100 potential participants applied! This means that the space industry is becoming more and more interesting. More and more people see it as potential for both business and their careers. As for the practical solutions, I think that we were well prepared for the work in a remote format in time - we had built a professional studio, which both allowed us to try different technical possibilities and was attractive to the spectators and participants. As for the ideas, there were simple ideas from people who had never been in contact with the space industry before. Thus, hackathon was a good opportunity both to learn more about technology and to understand the industry. But there were also people with in-depth knowledge and experience in programming, computer science and robotics. They worked on concrete solutions. Almost half of them were such technological ideas that they received honorary prizes.”

The 24-hour hackathon "Act In Space" is taking place for the fourth time and is organized by the French Space Agency in cooperation with the European Space Agency and its network of business incubators. For the first time due to the pandemic, the hackathon took place remotely, which was a big challenge for the event organizers, but everyone managed it successfully. In total, 70 participants took part in the Latvian hackathon, forming 13 teams. 20 mentors worked with them. One of them, Yoav Landsman, is an entrepreneur in Israel who invests in space technology and is a huge enthusiast in the industry. He's deemed the Elon Musk of the Isreali space industry. Yoav has more than 20 years of experience in the space industry and is the Deputy Director of the first Israeli Mission to the Moon.

The international space hackathon Act In Space was supported by global companies such as Airbus and Continental. The organizers of the Latvian event are the Latvian Space Industry Association (LAIK) and the Latvian Investment and Development Agency (LIAA).